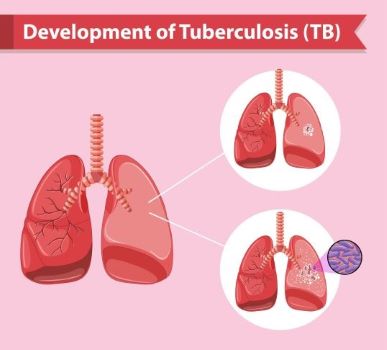 TB has been mentioned in the Vedas and  Ayurvedic scriptures as kshaya rog. In 1993, WHO declared TB to be a global emergency and devised DOTS strategy. In 1997, the Revised National TB Control Program (RNTCP) was launched and adopted this strategy. In year 2005, 0.04% of the TB cases in India were diagnosed and reported as MDR-TB, which rose to 0.15% (~4 times) in 2007.
Multidrug-resistant tuberculosis:
· MDR TB: M.Tuberculosis strain resistant to most potent TB drugs- INH & Rmp.
· XDR TB: Extensively drug-resistant TB (XDR-TB) caused by bacteria resistant to INH & Rmp  as well as to any fluoroquinolone and any of the second-line anti-TB drugs (kanamycin or capreomycin).
These forms of TB do not respond to the standard six-month treatment and take up to two years or more to treat with drugs that are less potent, more toxic and much more expensive. Both MDR-TB and XDR-TB are the emerging threats to anti-TB programs.
Drug resistance can be Primary resistance or drug resistance among new cases or Acquired resistance is drug resistance among previously treated cases.
Current protocol for treatment of MDR-TB : Standardized regimen: Empirical treatment for  previously treated Ist line TB drugs. It  includes essential drugs: Streptomycin, Pyrazinamide, Ethambutol Thioacetazone 2nd line drugs :Aminoglycosides (Kanamycin, Amikacin, capreomycin), Thioamides (Ethionamide, Prothionamide), Fluoroquinolones (Ofloxacin, Ciprofloxacin), Cycloserine/Terizidone and PAS
HIV & TB: In India, 2.5 million people live with HIV and AIDS (PLHIV). This population is 20 - 40 times more likely to develop active TB and is a leading cause of death in them. It accelerates HIV disease and MDR-TB and reduces HIV treatment efficacy. A national policy to coordinate common activities for HIV/AIDS and TB has been formulated by the National AIDS Control Organization(NACO) and the Central TB Division(CTBD) in 2008.
Conclusions :
We have come a long way in our fight against this deadly disease but many steps will have to be taken before we are TB free. WHO with its “STOP TB” strategy has given a vision to eliminate TB by 2050.