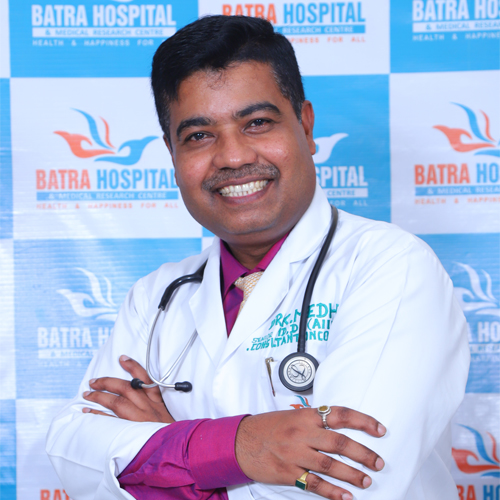 Dr K. Medhi is a distinguished Oncologist currently practising as a Medical and Pediatric Oncologist and Hemato-Oncologist in India. He has been working as Director of Oncology, Senior Consultant, and Head of Medical Oncology & Hemato-Oncology at Batra Hospital & Medical Research Centre, New Delhi, one of the oldest super speciality hospitals in Delhi & NCR.

Dr Medhi considers his specialization as a passion rather than a profession. He is named among the best Oncologists in India.

Trained and educated at the Premier Medical Institute in India- All India Institute of Medical Sciences (AIIMS), New Delhi, Dr K. Medhi has been mentored by the best in Cancer care.

BRAND ACHIEVER awarded Dr K. Medhi the ‘’ONCOLOGIST OF THE YEAR” award in 2015 on the basis of his outstanding contribution to cancer care.

In addition to his MBBS (Gold Medal), MD (Doctor of Medicine) and DM (Doctorate of Medicine, Post Doctoral) Medical Oncology degrees, Dr K. Medhi has experience working as a Senior Research Associate in AIIMS, New Delhi, under Council for Scientific and Industrial Research (CSIR) under HRDG, Govt. of India for 3 years from 2007 to 2009. He was also trained in clinical research at OXFORD UNIVERSITY (UK) in September 2007. He learned the intricacies of planning and conducting clinical trials methodically and the essence of establishing scientific evidence for the treatment and well-being of patients while he was enrolled as an external student at the London School of Hygiene and Tropical Medicine at the UNIVERSITY OF LONDON in 2007.

In addition, he also trained in PRACTICE MANAGEMENT at the Indian Institute of Management, Ahmedabad (IIMA), a premier Business School in India in October 2017 under Executive Education Programme.

Dr Medhi is also a Principal investigator in many clinical trials. Dr Medhi has many publications in reputed national and international medical journals to his credit.

He has spearheaded programme content for various CME programmes and focused group discussions with doctors, besides acting as a catalyst for various support group activities such as Survivors meeting, and counselling cancer patient and their families. He has actively participated in various health programmes such as health camps, lectures and diagnostic camps at various corporates, institutes, colleges and RWA community centres.

In addition, due to his great presence among the best cancer doctors in India, he has been invited to many cancer awareness talk shows on television and radio, as well as to several national conferences to share his professional knowledge. He has authored many articles for leading newspapers and magazines. He has delivered many guest lectures in various forums.

His ongoing objective is to reach out to less-developed areas of the country to spread awareness about cancer and its treatment. As a native of Assam, Dr K. Medhi has kept his commitment to serving the people of Assam. He visits various places in Assam every month, provides Consultation, and participates in various activities related to cancer awareness.

In addition, Dr Medhi is a very familiar name amongst the people diagnosed with malignant diseases (both domestic and international) and especially among the people of North East India for his coordinated help and guidance in the management.

Dr Medhi is also an active member of The Association of Oncologists of North East India (AONEI) and the Dibrugarh Onco Society. He is actively involved with “PRATISHRUTI”, an NGO in Dibrugarh as an Honorary Medical adviser.